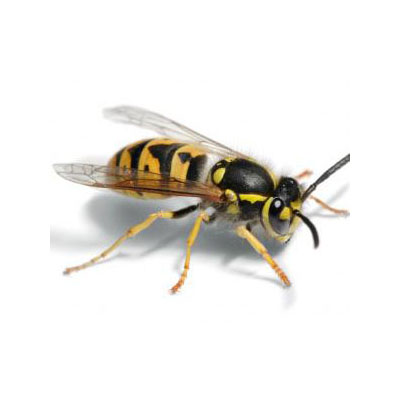 Wasps which are prominent in Australia:

Wasps build their nests in trees, shrubs, under eaves and in roof voids. They construct rounded community nests, normally oval in shape and about 1 metre long, with some containing over 50,000 individuals. They are predatory social insects and often act as scavengers in urban areas. They tend to nest around human habitation where there are greater opportunities of finding food. This food includes fruits, confectionery, cakes and soft drinks.

In spring and summer wasps are very aggressive and will swarm to attack anybody they consider a threat to the nest. They can release an alarm pheromone that marks the disturber and attracts other wasps to the attack. Wasps are a danger to children in playgrounds. People eating outdoors should keep their food and beverage covered until ready to be eaten, and any spills and leftovers should be cleaned up immediately. Apples, pears and other decomposing fruits falling from trees should be raked up or buried.

To control wasps, a chemical dust (such as Primethrin) should be used in and around the entrance of the nest. This will kill the wasps and their nest can be safely removed and discarded if need be.

Wasp stings can be very painful, especially to young children who are most at risk. Their sting can be a serious health threat to people who are allergic to the venom. Itching, pain and swelling can be reduced with antihistamines and a cold/ice compress. But if the person who is stung is allergic to the venom, then immobilise and wrap a bandage around the stings and seek medical attention immediately. The greatest risk however, is to be stung in the mouth or throat where the swelling can restrict or stop breathing. Wasps have a lance-like stinger without barbs and can sting repeatedly.

An experienced and licensed PEST–ZAP specialist is trained in wasp management, under no circumstances should wasp control be attempted or undertaken by an inexperienced or unqualified person, as this can be extremely dangerous.

PEST-ZAP specialises in the control of common domestic pests near Melbourne making your home safer for your family.